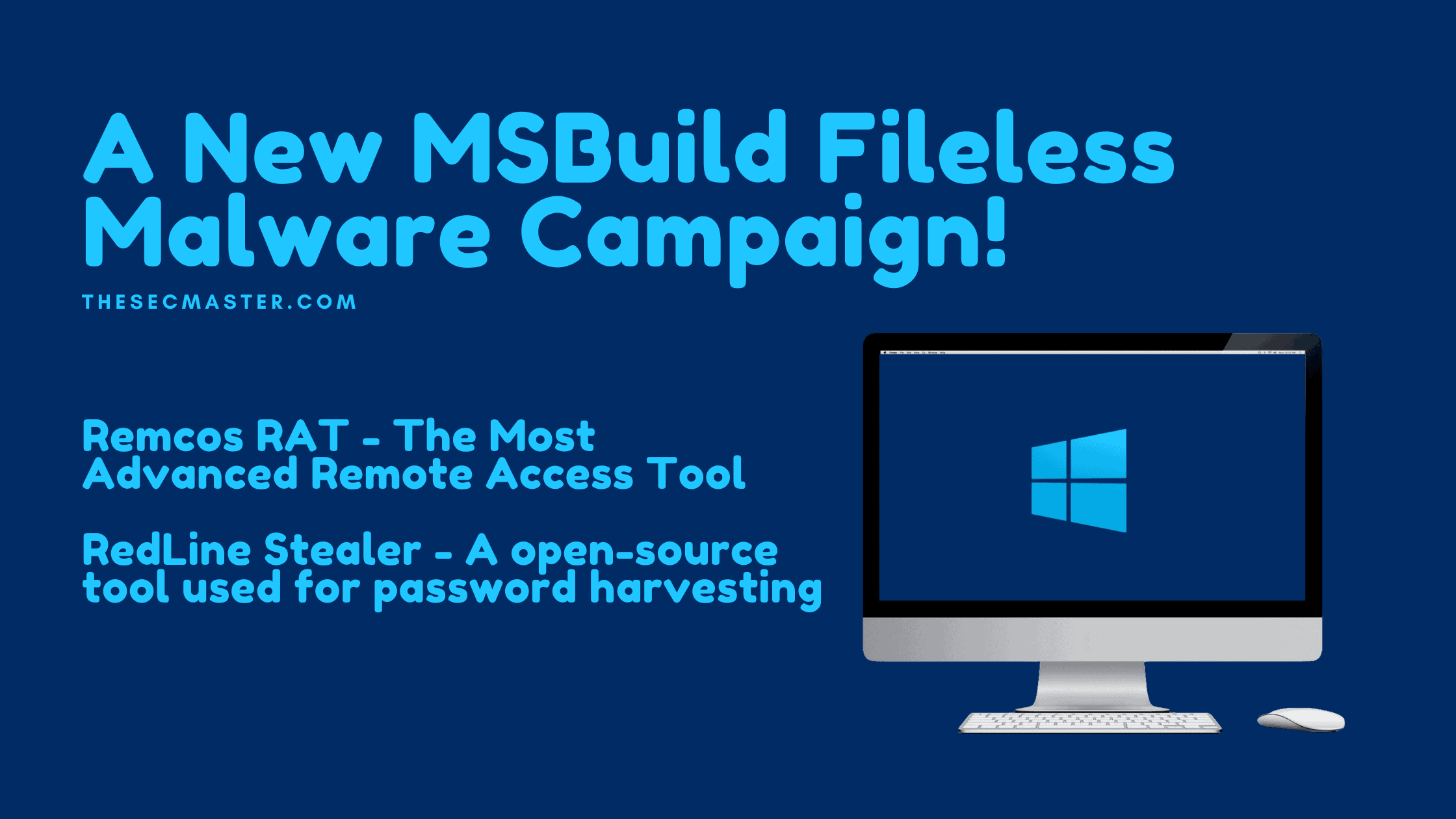 Another serious malware distribution campaign has been launched on the internet targeting the Windows system. The most disturbing fact is most of the antivirus engines were failed to detect the malware. MSBuild Fileless Malware Campaign has been launched last month in which Threat Actors used Microsoft’s MSBuild tool as a stealth weapon to deliver Remote Access Trojans and password-stealing malware known as RedLine stealer.

How Is This MSBuild Fileless Malware Campaign Designed To Deliver The Malware?

Threat actors have abused Microsoft’s MSBuild (A tool used for building apps) to deliver the malware filelessly. Primarily three malware were seen in the campaign: RemcosRAT, Quasar, and RedLine stealer in the campaign.

RemcosRAT (aka Remote Control and Surveillance software) grants full access to the remote attacker, its features ranging from capturing keystrokes, recording microphones and webcams to executing arbitrary commands. Quasar is an open-source .NET-based RAT that can be capable of keylogging and password-stealing with many other capabilities. RedLine stealer is a malware program that can harvests credentials from browsers, VPNs, and messaging clients.

It has been seen that threat actors have weaponized the MSBuild.proj file by embedding encoded executables and shellcode in it. At this point in time, we still don’t know how the malware is getting distributed. However, we have found that the malware was hosted on a Russian image hosting site joxi[.]net. Visit here to know more about it.

Why Threat Actors Used MSBuild To Carry Out The MSBuild Fileless Malware Campaign?

If you don’t know about MSBuild, it is a development tool mostly used for building applications for the Windows platform. Specifically when Visual Studio is not present in the system. MSBuild uses XML projects which stores the complete details required to compel the whole projects. There is a “UsingTask” element in the configuration file, which defines the task that will be compiled by the MSBuild tool. IN addition to the “UsingTask” element, MSBuild has an inline task feature that enables the code to be compiled by MSBuild and executed in memory. This feature to execute the code in memory has created an excellent opportunity for threat actors to use MSBuild in this MSBuild fileless malware campaign.

What Is Fileless Malware? And, Why Is It Important To Know About It?

Fileless malware is a type of malware that uses a legitimate program to load the malware into memory. Unlike traditional malware, fileless malware does not require the attacker to drop a code on a target’s system for execution. This technique has made it hard to detect. In practical conditions, most of the antivirus engines either failed to detect the fileless malware or flag low severity detection.

Remcos is a commercial software created by Breaking Security. It has both community and as well as free edition. The application has been created to support remote administrators to perform remote control, remote admin, remote anti-theft, remote support, and pen-testing. However, Remcos has often been used by threat actors for malicious purposes. The software is written in C++ and enables full access to the remote machine. Some of its features include:

As the name says, RedLine Stealer is an open-source tool used for password harvesting. It is written in .NET and has been observed stealing credentials including:

How To Prevent The MSBuild Fileless Malware Campaign?

If you find this article interesting. Visit our site to read more: