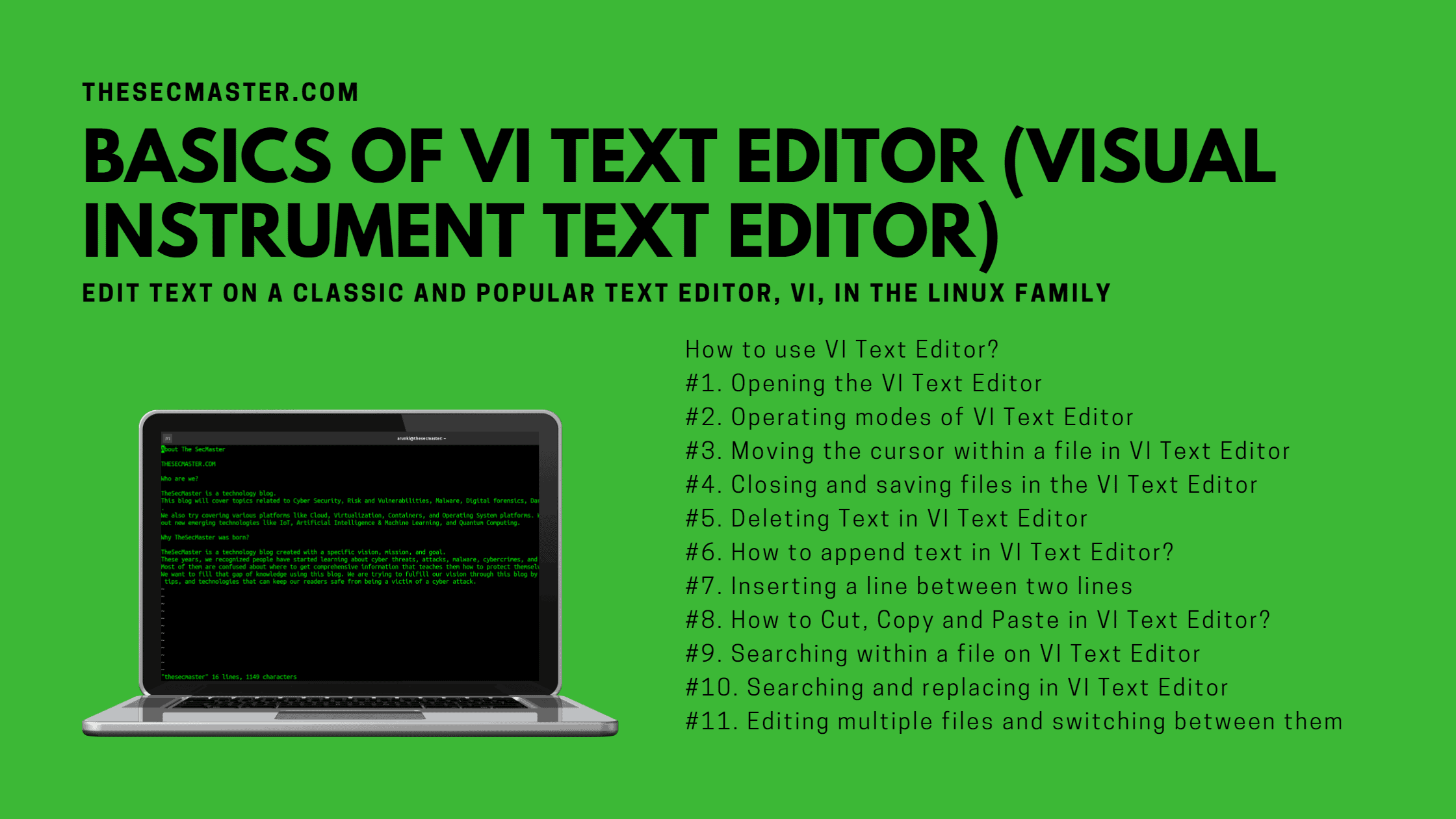 Sometimes, the intrinsic text needs a user-friendly and feature-ready tool for editing. To edit text on Linux, there’s a Text Editor called Vi(Visual Instrument). VI text editor helps accomplish work with exclusive keywords instead of menus. VI Text editor works in either insert mode, command mode, or command-line mode. Insert mode is where the text that you type in becomes the part of the document, and the command mode is where each keystroke is considered a command by the system. You get the command line mode by inserting the colon : key. If you press the key ‘i during the command mode, it turns the editor into insert mode. We have created this post to let you know the basics of VI Text Editor so that you feel easy to work on text files on the command line interface.

Vi is a modal editor; thus, the above two functions are possible without having to go to the home button to assign individual functions to specific keys, as several purposes, but the primary one was to make visual text editing User-friendly for users and make the text attractive for them. Welcome to the introduction of VI Text Editor.

How To Use VI Text Editor?

Vi uses the basic format of editing and does not follow up with fancy projections like others. Here you will not retrieve a text which looks precisely as it is presented on your screen. The editor lets you change, delete and add text to your file but does not allow you to do additional formattings such as paragraph indenting and line centring.

To launch the VI Text Editor, open the terminal and type the following.

vi <filename EXISTING> where “filename” is the name of that file which is already existing in the memory of the Text Editor. You can also create a new file by entering the command <filename_NEW>. If you do not remember the name of the file, you have to enter the entire pathname of the file. If the file that you want to open does not exist, it will show a screen with only a cursor, and the tilde (-) sign will occur in the first column.

There are two modes of VI Text Editor-

The default mode on the VI Text Editor is the Command Mode. In Command mode, essential functions are performed by giving commands. These include moving around in the file, making changes, and exiting that particular file. These commands are executed not by using any specific key but by using the alphabetical keys present on the QWERTY Keyboard.

Commands given in the command mode are in the form of alphabetical mode but are case-sensitive. “I” is not the same as “i”. Commands given in the Command mode when processed, do not appear on the screen as you enter them but instead, they appear in the last line. When you are giving commands in the Command Mode of VI Text Editor, you have to hit colon <ESC> to take the cursor to the last line of the text and then enter the command and hit <enter>.

For example, if you want to save a particular file, then first hit <ESC> and the “W” and hit <enter>. Talking the cursor to the last line of the file is also called the last-line mode or command line mode.

This is the mode in which the text is created. You can switch to this mode from the Command Mode by pressing”i” on the Command Mode. While creating text, you should enter “Return” and move to the text line or set up a “wrap margin” and do the same. You can enter Insert Mode by other means too, but you can exit it by only using the <ESC> button.

#3. Moving The Cursor Within A File In VI Text Editor

Since the command mode accepts commands when you hit an alphabetical key can use it to move within a file without using the usual cursor keys.

To use these keys, you have to be in command mode.

#4. Closing And Saving Files In The VI Text Editor

#1. Deleting One Character From The Text

This command, with “x”, deletes the characters or the spaces on the right-hand side of the cursor, where it is placed.

Alternatively, if you want to delete characters or aces to the left-hand side of the cursor, then place the cursor accordingly and hit “X”.

#2. Deleting A Word Or Line From The Text

#6. How To Append Text In VI Text Editor?

#7. Inserting A Line Between Two Lines

command “o”. This will move the current line above its former occupied space, thus, creating a space below it.

For copying a particular text, you have to hit the command”y”, followed by the direction keys, which will help you select the text you want to copy.

You have to hit the command “d”, followed by the direction keys. This shall help you to cut the necessary parts of the text.

To paste, move the cursor to the required position and hit”p” to paste the text after the cursor or”P” to put the text before the cursor.

#9. Searching Within A File On VI Text Editor

To search within a file, you need to be in the Command Mode. Type “/” followed by the string which you want to search in that particular file. After this. You have to hit <enter>. This will lead you to the first occurrence of the word in the file. Then you can hit “n” to find the next occurrence or”N” to go back to the previous occurrence.

If you want to search a certain word and replace it with another one. then you need to activate this particular command in the Command Mode.

For example, if you want to replace “soft” with the word “hard”, then the command for this goes like this, <:%s/soft/hard/>

If you want to replace all occurrences of the word, then you need to follow it up with a “g”. <:% s/soft/hard/g>

#11. Editing Multiple Files And Switching Between Them

You have to use ex commands for carrying out this task. The command for this goes as follows. For invoking multiple files,

This command will open two files, “power” and “play”, in the particular order. You have to do the edits in the text file “power” and save it with <w> and move to the next file with <n and do the edits and save it with *. Just keep in mind that when you switch between two files, make sure that you go to the Command Mode to execute the command. Besides, if you want to insert another text file while editing the above two lines, you can also do that with the following command. First, save the files with <:w> and then open other files with

This will open the file “button,” and you can continue your edit by switching between the files.