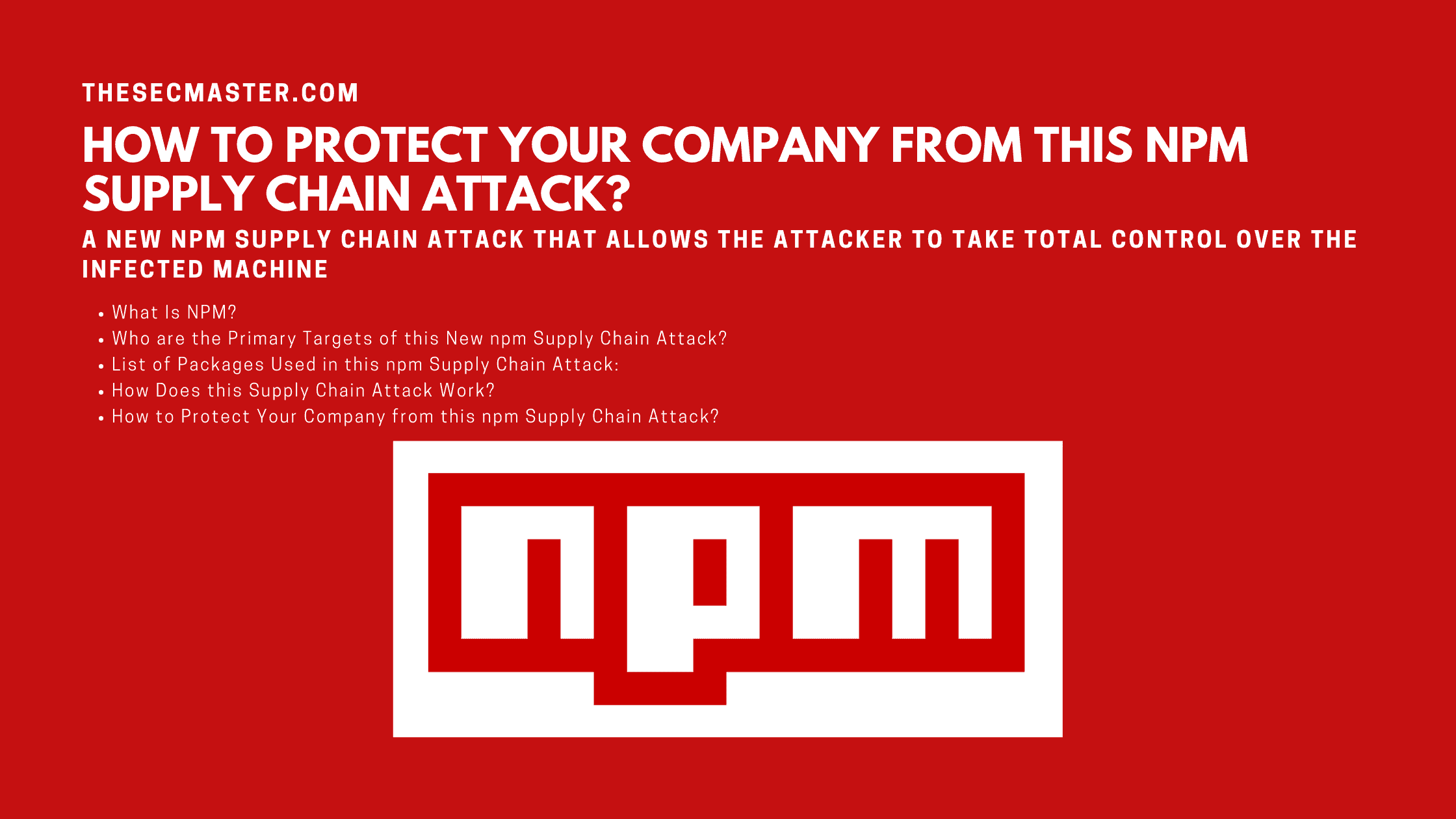 How To Protect Your Company From This npm Supply Chain Attack

The security research team from JFrog recently disclosed an npm supply chain attack in which the Company revealed multiple malicious packages in the npm registry. The Company also claims that the malware found in this mpm registry is found to be more dangerous and sophisticated than its early detections. According to the report, this malware will act as a backdoor and allows the attacker to take total control over the infected machine. JFrog also added that the malware are not developed using publicly-available tools but developed in-house. Since the npm packages associated with this supply chain attack are found to be more dangerous, it is worth knowing how to protect your Company from this npm supply chain attack.

NPM is a package manager for JavaScript that helps developers share and reuse code. It includes a command-line interface (CLI) that can be used to install, uninstall, and update packages. NPM can also be used to create and publish new packages. NPM is short for Node Package Manager. It was originally created to support the development of Node.js, but it has since been extended to support other programming languages as well.

The npm CLI provides a number of commands that can be used to work with packages:

NPM is an important tool for JavaScript developers and is widely used in the Node.js community. If you’re just getting started with Node.js, be sure to check out the npm documentation to learn more about how to use it.

Who Are The Primary Targets Of This New npm Supply Chain Attack?

JFrog published in its technical post that the attackers were apparently targeting a number of prominent companies, including private, public, and governmental companies based out of Germany.

List Of Packages Used In This npm Supply Chain Attack:

Research says that the packages created by these four maintainers were being used in this supply chain attack. Please make a note of the name of these maintainers and remove the packages if you have downloaded them.

The vendor confirmed that all the packages were removed from the registry (except packages created by ‘stihlnodemodules’) at the time of writing this post. We urge you to validate the packages and remove them if you had downloaded them before it was removed.

How Does This Supply Chain Attack Work?

The malware has two functional components:

The dropper will exfiltrate the information like the victim’s username, hostname, and the content of the files “/etc/hosts” and “/etc/resolv.conf” to the malware’s server ‘www.pkgio.com‘. Upon the completion of the exfiltration process, the dropper will initiate the process of payload execution.

The payload is a malicious code that could be a backdoor, an HTTPS client, which registers itself on startup to a hardcoded C2 server and receives commands from it. The list of commands the payload receives from the C2 server are:

Please visit the post for the derailed technical report.

How To Protect Your Company From This npm Supply Chain Attack?

There are two actions that you can take on immediate effect: