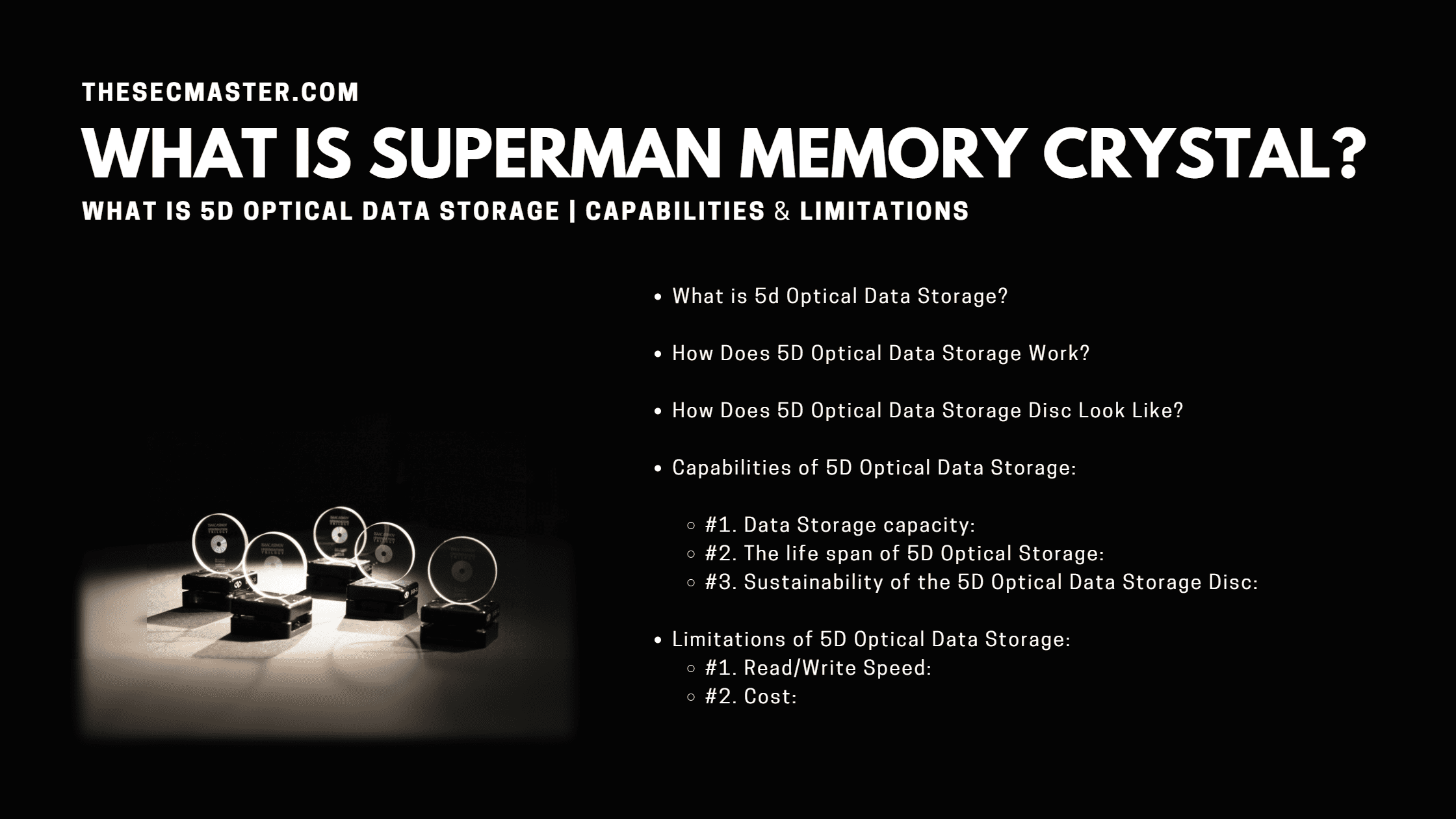 Storage is a sector that holds tressure (data) in the digital world. Demand for storage keeps increasing with the digitalization of the globe. From individuals, small to big size organizations, governments, private and public businesses, schools, and universities, everybody wants more storage with better protection. To full fill this need, scientists have always kept innovating storage technology over the years. As a result 21st century has seen rapid growth in storage technology development. Now we are making our way towards a big milestone, a new storage technology that could hold 500 TB of data in just a tiny 1′ inch optical drive for billions of years. Have you ever heard that? That’s why we are here to introduce you to a totally new storage technology known as ‘5D Optical Data Storage’ or ‘Superman memory crystal’. Let’s begin this post with what is 5D Optical Data Storage and how this technology work and what are the capabilities and limitations of this new technology.

What Is 5d Optical Data Storage?

Scientists from the University of Southampton in the UK have made a high-capacity optical memory that lasts for billions of years.

In order to increase the storage capacity of optical storage, scientists used the birefringence technique on the optical drive. This allowed storing more than one bit in a single voxel. The scientist made an optical disc that could hold 8 bits of information in a single pit by combining the birefringence technique and pit size of less than 200 nm. This combination of the technology enables to store unprecedented capacity of hundreds of terabytes in a single 12cm-diameter disc.

5D optical data storage technology uses a fast and precise femtosecond laser to create tiny pits on the fused silica glass containing self-assembled nanostructures (nanogratings), which are 20 mm in size. The nanogratings change how light travels through them like polarized sunglasses. This allows reading information about each nanogratings depending on how the light is transformed. Based on each orientation of the nanostructure, the changes to the light convey five ‘dimensions’ of information. Read the technical details about the 5D optical data storage technology from here.

How Does 5D Optical Data Storage Disc Look Like?

5D Optical Data Storage Disc is made out of the same glass material used in optical fiber cable, creating a submarine cable network. In size, It just looks like a half-inch radius circle glass plate with a thickness of about half a centimeter. Data is burned on the 5D optical storage disc permanently by firing up a powerful beam of laser on a single layer of the multi-layered optical disc creating pits of less than 20 nm size. Each pit will be created with 256 different variations in shapes and orientation to store 8 bits of data in a single pit, which gives an effect of multi-dimension on a single plate. This multidimensional structure allows creating trillions of pits on each layer. Scientists from Southampton University have created 200 layers in a single piece of glass that is half a centimeter thick.

Due to its high density and nano-sized pits, it achieved several TB of data per disc of 12 cm thick. According to the estimation, it is said that about 500 TB of data could be fit into a disc of 12 cm in diameter.

Data storage life span is one of the biggest problems ever had. It is a very troublesome task to maintain the data for centuries with the current storage options. Magnetic data storage such as HDD and magnetic tapes provide a lifespan of around 2 to 3 years. Semiconductor data storage such as solid-state drives and flash drives, and conventional optical data storage discs such as CD, DVD, HD DVD, and Blu-ray provide a lifespan of around ten years. Other devices such as holographic memory can only reach a lifetime of a few decades. This new 5D optical data storage technology has broken all the barriers and made a big achievement to store the data for several billion years. Scientific estimations say that data can be stored for up to 13 billion years, which is the approximate age of the universe.

5D optical discs are highly stable when it comes to survivability. Because the discs are made out of fused quartz glass, which is one of the most chemically and thermally durable materials on Earth, the discs can survive fire and temperatures of up to 1000deg C. Additionally; the disc can survive the direct impact of up to half a ton.

Well, this 5D optical data storage technology has removed the barrier of storage capacity and storage lifespan, but it has a new challenge of data transfer. Recently, scientists described a new method to write the disc. This new technique utilizes two optical dimensions and three spatial dimensions to write. Using this new method, it’s achieved writing speeds of up to 1,000,000 voxels per second, which is equivalent to 230 kilobytes of data per second. 23Kbps sounds relatively very slow when it compared with the speed of SSDs, which writes the data in 3 to 5Gbps. It takes approximately takes 700 years to write 500TB of data with 23Kbps of speed.

When writing this post, 5D optical data storage technology isn’t available to the public. However, it can be made public in the coming years. This is not the correct time to discuss the pricing part. As Dr. Kazansky stated in a recent study, “This technology could be produced on a commercial scale for organizations with large archives (e.g., national archives, museums, libraries, and private organizations). We believe that our method will also prove attractive for the consumer market if the cost of hardware (particularly the expensive femtosecond laser) is reduced.” As of now, the equipment is very expensive. It is obvious when a new technology comes to the consumer market. As days pass with more production, there could be a fall in the price either.