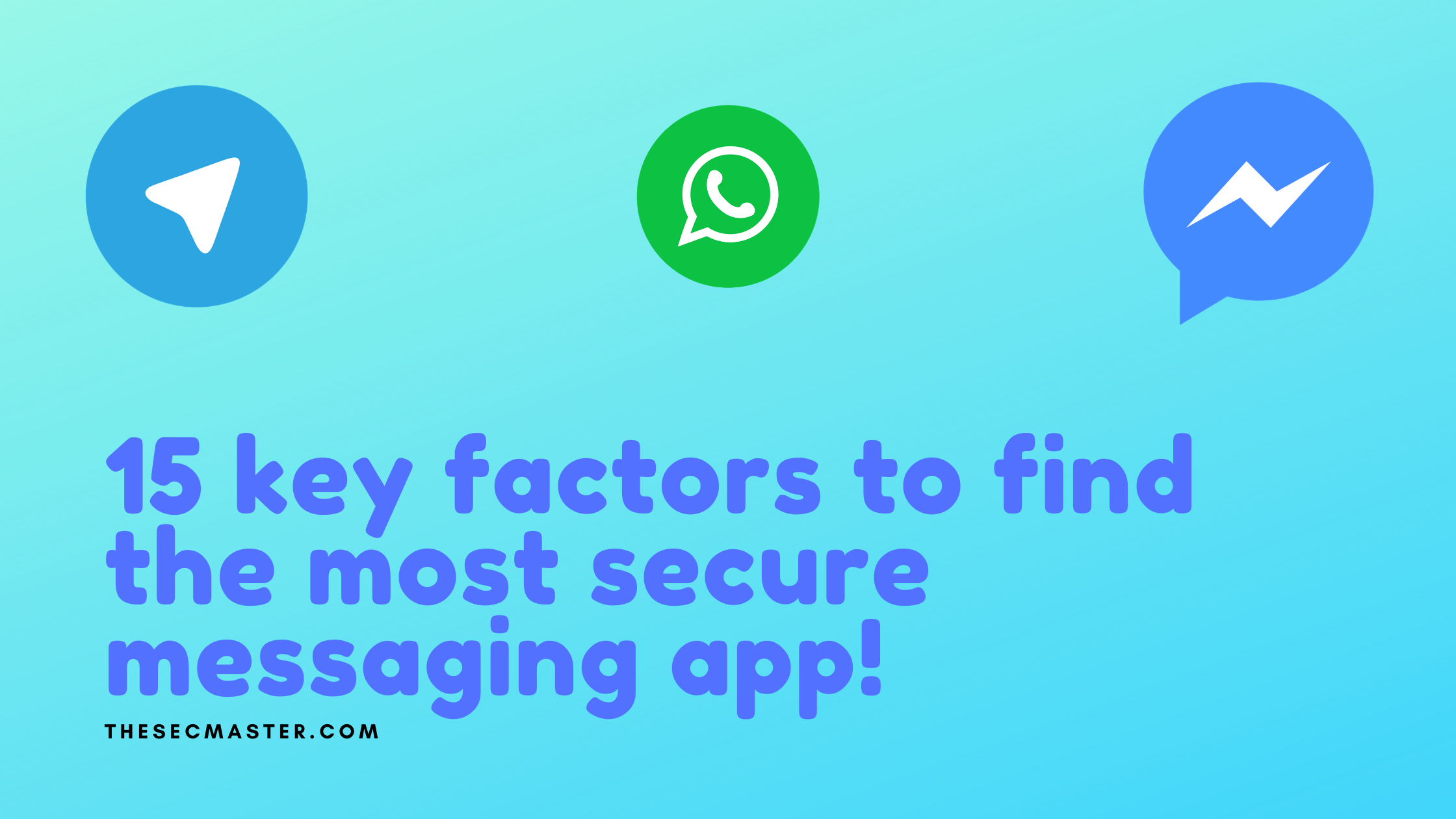 15 Key Factors to Find the Most Secure Messaging App!

This post will cover the 15 key factors in this article, which will answer the question “How to find the most secure messaging app?”.

Encryption is the most proven secure way to exchange information over a public platform like the internet. When we come to internet messaging apps, they all follow two types of encryption: 1. Client-Server Encryption, 2. End to End Encryption.

In the client-server encryption method, companies just encrypt the messages from the sender device to their server. They are decrypted and stored on the server, then encrypted from the server to the recipient device.

In the case of end-to-end encryption, the message gets encrypted before leaving the sender’s device and gets decrypted only upon reaching the recipient’s device. Decryption doesn’t happen at any point in the middle. The first factor is clear. Your messaging app should follow the end-to-end encryption method. There are some additional points to be considered while finding the best secure message app. Ask these questions to your messaging companies and get them clarified before starting using the application.

Many messaging companies promise that they are fully compliant. How can you trust their words blindly? Until the companies hide their source code, you can’t validate what they do with your data. We recommend going for the apps which have published their source code on the internet. It’s not the matte of license. But, it’s a matter of trust.

This factor talks about the integrity of the application. As long as the company is in the market, it earns trust. This may not be true in all cases but in most. This factor proves their experience in a particular landscape. Ask yourselves a question, which app do you trust the more? The app launched a few days ago or has been around for years.

What is metadata? There are two types of content. The actual content and information about the content. In simplistic terms, metadata is just called “data about the data. “ I can reveal much information about you, and it lets the messaging companies learn about you, for example. The company may not know what conversation you had with your wife. But, it knows you spoke to your wife, how long you spoke, from what time to what time you spoke, how many times you spoke to your wife, and from which location did you speak to your wife more? Your messaging company can learn about you beyond your imagination. Now, you may ask what else the companies can gather. Here are some metadata information being collected by the top companies.

What Data WhatsApp Collects From Its Users?

What Data Does Facebook Messenger Collects From its Users?

What Data Does Telegram Collects From Its Users?

What Signal Collects From Its Users?

Two things it actually validates. Identify the other side person and channel encryption. Firstly, this feature of messaging apps helps to validate the person on the other side is the verified user of the application. Secondly, it confirms the communication channel between you and the other side person is encrypted, secured, and private. This you can verify by finding answers to these two questions.

The next important factor is what data the app collects and shares with others. The most secured app never collects or shares any user data with others. If any app is doing this, then you may leave the app. In the metadata policy section, we have told what types of data messaging companies are being collected from their users. In this section, we focus more on the data storage and sharing policy. Some companies climes that they don’t store the collected data on their servers. Some companies climes they don’t collect the data itself. It’s good that they don’t. What if they said they collect the user’s data? There are some questions we have listed here to check with your messaging service company.

When we say content, we are talking about user-created content: A test, image, video files, and any other media that users exchange with other users on the messaging apps. It’s not the data collected by the companies from the user content. A privacy-oriented company never stores the user’s created data on their servers. Users’ data should be on their own devices. The best companies say they don’t collect any user content and delete all the content when it is no longer necessary. Please check with the application owners that they are going to store your content even in encrypted form. Are they say yes to you, then believe that they will put your content at risk because any content stored on central servers could be stolen anytime by hackers.

This plays a vital role in authenticating your messaging app. Most messaging apps support multiple client applications. Apps let their users set up and access different devices to increase the user experience. But, users may face unauthorized access issues if they improperly handle those messaging apps. Two-factor authentication is the best countermeasure to overcome unauthorized access attacks. This feature challenges users to prove their identity by supplying two or more identity factors to login into the app. Security experts say this feature adds another layer of security to the applications. Which is a good thing, isn’t it?

Both are good and bad in their way. If the application is built to work on a decentralized platform like peer to peer network, there is no central server to compromise and no central point of failure. On the other hand, if your application has a centralized ecosystem, then you may need to trust their servers with your metadata. It’s controversial to say which is better. Until your app is offering end to end encryption, anything is fine.

It’s not important for all except a few people. Suppose you are a journalist, working in a spy company, or working for a government-sponsored secret organization where you want to communicate with others without exposing your real identity. In that case, you may find applications that offer anonymous accounts. In most cases, it doesn’t satisfy the common people’s requirements. You can leave this option as optional.

It’s essential to consider the app that comes under which jurisdiction. This lets the users know where the company is registered. From which country do they run the business? In which part of the word, the company hosted its data centers and stored the data. In general suggestions, we recommend that people avoid the jurisdiction of Five Eye Alliance as those countries may force your application companies to share some amount of your data with them.

On top of being an open-source application and publishing the source code on the public platform, periodic public code audit and the endorsement policy of the company justifies its loyalty to its users. What else do you expect from your app developers? This type of company is considered the most trustworthy. Ask your application developers these two questions to ensure how serious they are about this.

Have there been a recent code audit and an independent security analysis?

Does the company provide a transparency report?

This is one of the adorable features if your app supports it. It’s always subjective. Some people may find it is useful. Some may not. This feature is not for those who love to keep all the messages intact. This feature is for those who want to share confidential information with their peers that they don’t want to be lingering in their chat histories. This option lets the users share the message only for a short period. The signal messaging app offers powerful flexibility for its users, letting their users set the message destruction time from 5 seconds to 1 week. After the defined time, the message will be deleted from all senders and recipients.

According to forwardsecrecy.com, “The concept of Perfect Forward Secrecy (PFS) is the property that ensures that a session key derived from a set of long-term public and private keys will not be compromised if one of the (long-term) private keys is compromised in the future“. The app with this feature provides greater security in terms of encryption.

After compiling the list of factors, we can say that you may not see such a perfect app that satisfies all the factors. We suggest you consider all these factors and run across your choice of messaging apps. Try to find out which app would meet most of the factors that give it a try. This is how you can find the most secure messaging app.

Thanks for reading this article. Please leave your comments below, which would encourage our team to bring more such articles for you.