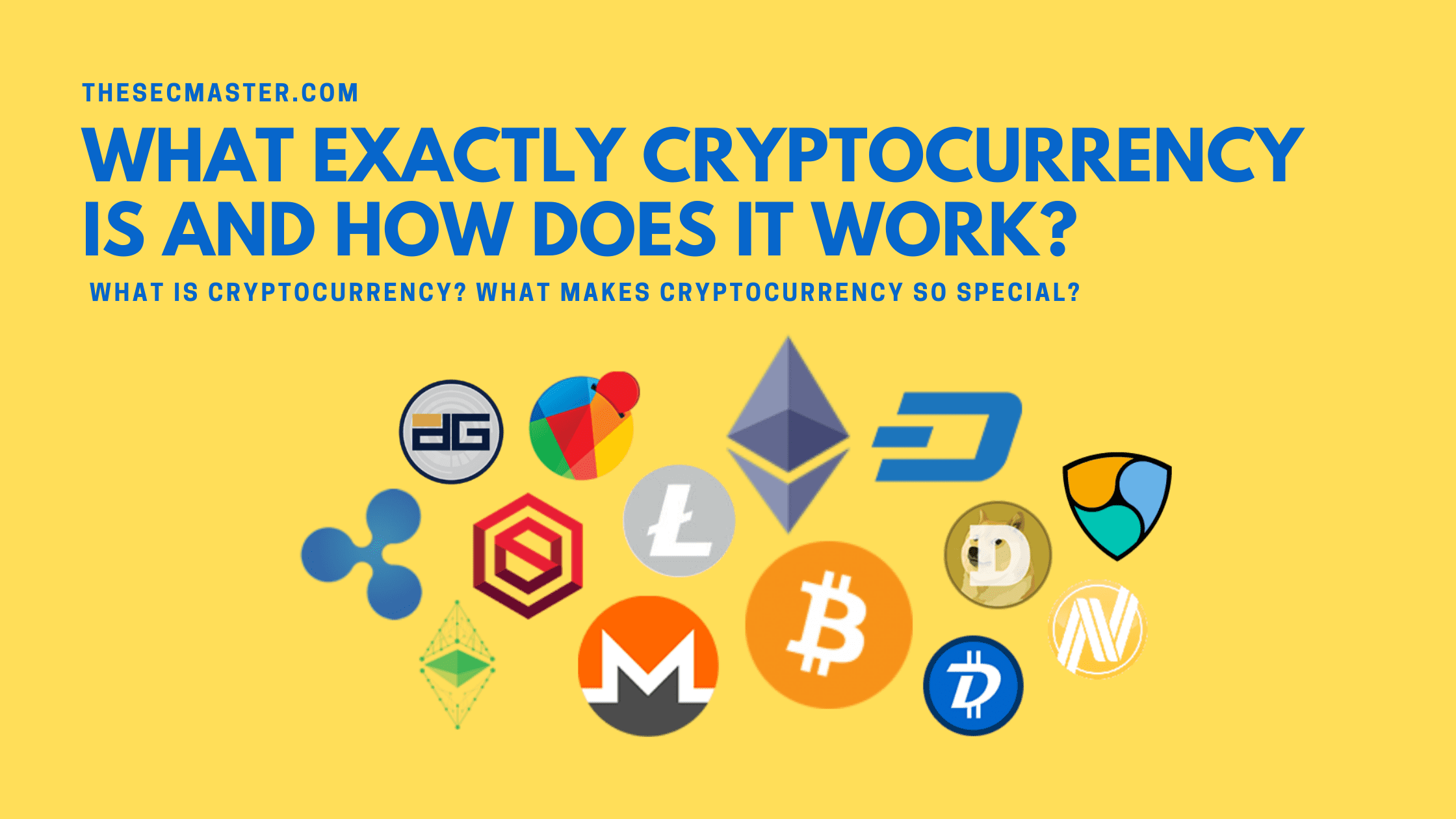 Here is a high chance that the topic of Cryptocurrency may have come up in many of your conversations with friends and colleagues. So what exactly Cryptocurrency is? Well, it’s something everyone talks about, but not everyone understands or knows how does it work.

Over the past decade, we all have witnessed the evolution of cryptocurrencies, especially their two most popular versions; Bitcoin and Ethereum. This might come as a surprise to you, but a report released by CoinLore states that there are over 5,000 cryptocurrencies in circulation, which is astounding! Whether you’re looking to invest in Bitcoin or want to explore different versions of Cryptocurrency, you can kick start your investing journey today!

This post gives you an in-depth view of what exactly Cryptocurrency is and how does it work. So, without wasting any further time, let’s dive into this post about Cryptocurrency.

Cryptocurrency is decentralized digital money based upon blockchain technology, a powerful medium of exchange secured by cryptography. It is a unique technology that prevents counterfeit or double-spend. A significant feature that differentiates Cryptocurrency from other currencies of the world is that it is not issued by any central authority. Also, it is immune to government interference.

Since human existence on the planet, the currency has played a significant role in our lives. In the beginning, the barter system prevailed, but it fell out of use because it had some glaring flaws. In 110 BC, an official currency was minted, while in 1250 AD, florins came into use across Europe. The paper currency gained popularity from 1600 AD to 1900 AD.

In today’s era, modern currency, including paper currency, coins, debit cards, Apple pay, Paytm, and so on, are in trend, which is controlled by financial bodies. During such transactions, there are several ways where such an exchange of money can go wrong. For example, if there’s any technical issue at the bank or the servers are down, there is a central point of failure, which could result in inconvenience. To tackle such rapidly emerging problems, the future of currencies lies in Cryptocurrency. It is the need of the hour as it effectively removes most problems of modern banking, such as;

Cryptocurrency is quite similar to real-world currency, just that it does not have any physical existence, nor can it be seen, touched, or felt. Cryptocurrencies are a system that promotes secure online payment without any risk involved. These are termed “virtual tokens,” which can be used to buy regular goods and services or as an investment, same as other assets such as stocks, shares, precious metals like gold, silver, and platinum. Although purchasing cryptocurrencies is quite exciting, it can be risky as well if one does not invest a fair amount of time in researching before buying Cryptocurrency.

What Is “Crypto” In Cryptocurrencies?

The word “crypto” refers to cryptography, a method to secure your data in the presence of a third party by using encryption or decryption. There might be a case when third parties want to steal your data through unconventional sources. Cryptography is a method that uses the computational algorithm to protect the data from third-party.

What Makes Cryptocurrency So Special?

The global economy is rapidly moving towards a digital world where paper currency and coins won’t be needed. And why not, as Cryptocurrency is the newest and most promising addition in the digital ecosystem. Over the last few years, Cryptocurrency has been rapidly getting attention and is on the top of everyone’s mind for all good reasons. Below we have mentioned five reasons that make Cryptocurrency so special. Let’s have a look.

How Does Cryptocurrency Work?

Cryptocurrency is the transfer of digital assets. Unlike the Indian rupees or the UIS dollar, there is no mainstream authority that manages the value. Instead, the task of managing and maintaining the records is itself distributed among the cryptocurrency users via a chain of the network, which is nearly impossible to break. Satoshi Nakamoto created a digital cryptocurrency popularlyknown as Bitcoin in 2009, which revolutionized the digital market. Nakamoto described the project as an electronic peer-to-peer cashless system.

The Most Popular Cryptocurrencies:

Did you know Bitcoin was the first-ever blockchain-based Cryptocurrency ever introduced? Today, there are more than 5000 cryptocurrencies with different functions and specifications in circulation. The fun part is that Bitcoin, released in 2009, remains the most popular and valuable Cryptocurrency ever introduced. As per the recent records, there are over 18.8 million Bitcoins in circulation, and the figure is multiplying each day.

Apart from Bitcoin, there are several other popular cryptocurrencies. They are:

What Are The Advantages Of The Cryptocurrency?

In traditional business dealings, middlemen like banks or bank agents typically charge a heavy sum as fees when buying or selling things online. These charges can be anything from maintenance charges, annual fees, convenience fees, and so on. However, in the case of Cryptocurrency, there is no middleman involved, which means these transitions are one-to-one dealings that occur on a peer-to-peer network structure without any outside interference. This means either the transaction fees will be greatly reduced or completely eliminated.

With all traditional systems, there might be chances that your bank information becomes available to certain third parties when you perform certain transactions. For example, in the United States, when you give your credit card to anyone, they have access to your full credit line. When you make transactions, they are clearly recorded in the history by the bank, which isn’t the ideal scenario if you do not want to showcase your transactions. When a cryptocurrency holder makes a transaction, the software only pushes out the information relevant to that particular transaction. No other information is exposed without the cryptocurrency holder’s knowledge, which minimizes the chances of fraud.

International payments from traditional cards usually attract a certain fee or charge, which is sometimes even greater than the amount of the commodity. Since cryptocurrency transactions have no intermediary institutions or government to pass through, the amount paid by the user in the same country and the user from the other country remains the same. This feature is especially beneficial to frequent international travelers because now there’s no need to travel with lots of cash or stress about the extra charges to be paid on an international goods-a win-win situation.

Anyone with an internet connection and smart devices can easily send or receive money or Cryptocurrency. This feature is exceptionally beneficial for the unbanked members of the society, who do not have access to the traditional banking system but the network to run Cryptocurrency and make payments of regular purchases.

With traditional transaction systems, sometimes there are additional charges paper work, legal lease, or some unknown hurdles, which can be aggravating at times to tackle. However, with Cryptocurrency, you are directly in contact with the person you’re conducting the transaction with.

Because Cryptocurrency is a decentralized system and there are absolutely no third-party approvals needed to make the transactions become much smoother and faster.But like everything, Cryptocurrency, too, has certain disadvantages that you must be aware of. Below, we have discussed the disadvantages of Cryptocurrency. Let’s have a look.

What are The Disadvantages Of The Cryptocurrency?

Over the years, Cryptocurrency has become a major point of discussion. Especially for investors. However, investors are pretty excited to invest in the highest-grossing Cryptocurrency. They need to be aware and analyze the various disadvantages of Cryptocurrency. Here are the things to know before investing in Cryptocurrency. Let’s get started!

Records state that Cryptocurrency is way more volatile than any assets like stocks, shares, or bonds in which investors mostly invest. They need to be aware that the prices can go up to 25 percent in a minute and can come down, which is extremely common, to 50 percent the very next moment.

Since Bitcoin and other cryptocurrencies have become so popular and valuable, be aware of scammers and hackers. Attackers are on their way to get into investor accounts even if a few exchanges are done.

2021 has been a year to remember for Cryptocurrency. When we see Bitcoin crossing all its paths and touching new heights, it indeed shows a commendable impact on the industry and institutions. It’s not only a hot topic between investors but also among the general public who are attracted towards Bitcoin and altcoins. However, the economic damage caused by COVID-19 Cryptocurrency has managed to surge in the past couple of months. To quote examples, Bitcoin has risen from $7O00 to $26,000, whereas Ethereum, which was at $130.27 at the beginning of the year, is now more than double. Although, it was not the first time that Bitcoin or other cryptocurrencies witnessed a massive rise. The same thing happened in 2017 when it jumped unexpectedly.

Cryptocurrencies can be volatile, but they are the future of the digital ecosystem. With well-thought decisions and superior understanding, one can easily tackle the existing flaws of Cryptocurrency.
We hope this post will help you know What Exactly Cryptocurrency is And How Does it Work. Thanks for reading this threat post. Please share this post and help to secure the digital world. Visit our social media page on Facebook, LinkedIn, Twitter, Telegram, Tumblr, & Medium and subscribe to receive updates like this.