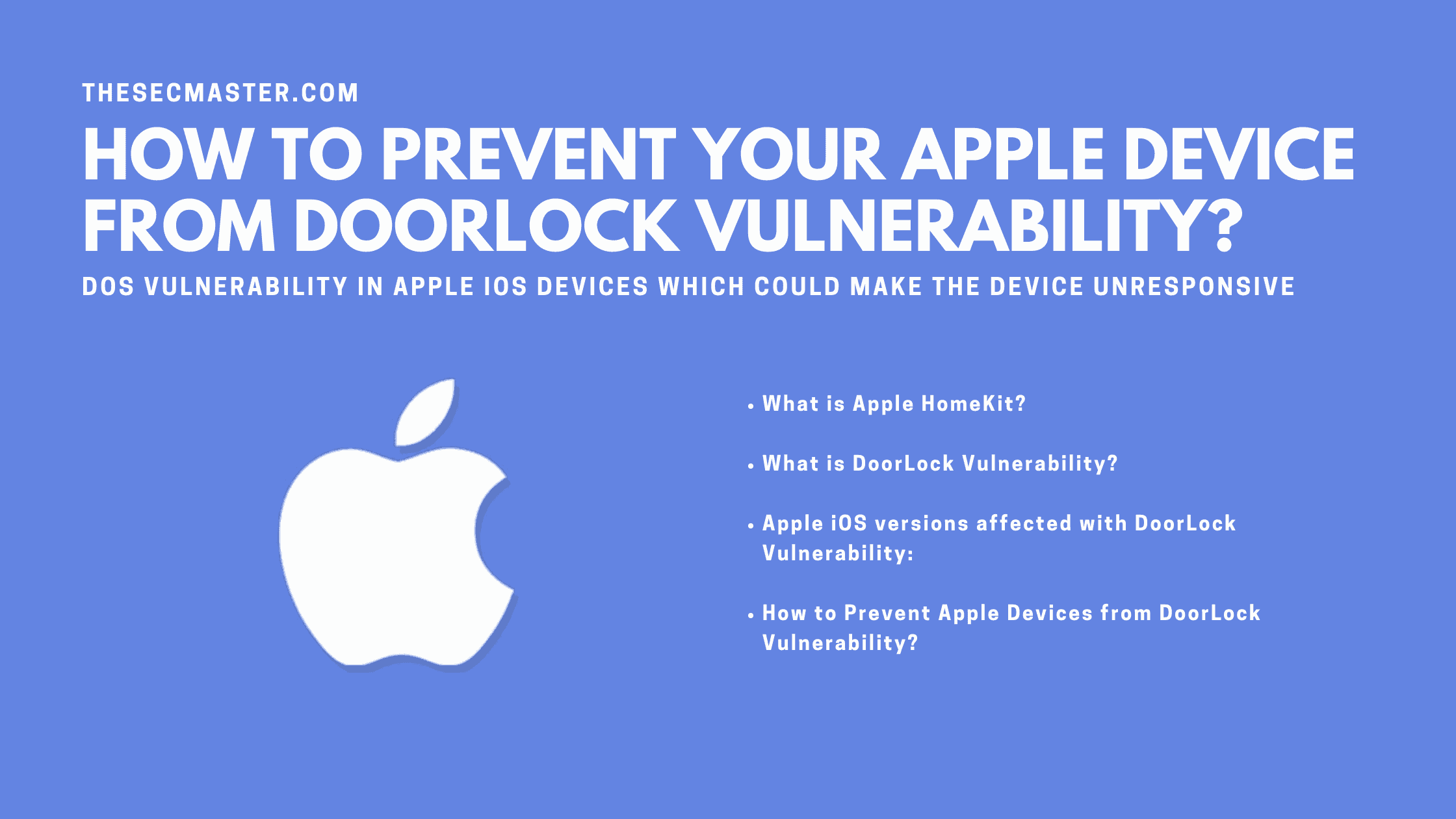 How To Prevent Your Apple Device From DoorLock Vulnerability?

Researchers published a new vulnerability in Apple iOS devices that could let an attacker completely make the device unresponsive. The flaw is tracked by the name of ‘DoorLock’ was found in HomeKit of iOS, which allows an attacker to perform a denial of service attack on the vulnerable iOS device, which could make the device almost unresponsive. Since the bug is not fully fixed by Apple, it has become more important for all iOS users to be aware about the flaw and take the required steps to prevent their Apple devices from DoorLock vulnerability. We have published this post to educate you about the flaw and Let you know how to prevent your Apple device from DoorLock vulnerability.

What Is Apple HomeKit?

HomeKit is a central management system built by Apple to manage smart devices like lights, locks, plugs, cameras, and more from their Apple devices. It enables Apple users to control all the connected smart devices over the internet as like Google Assistant or Amazon’s Alexa. It lets you to turn on/off the lights, change color if they are multicolored, dim or brighten the light, schedule air-conditioners and heaters as per your schedule, turn on the recording or take a picture from your smart camera, and pretty much everything that your smart devices can do. You just need to register the smart device with your Apple ID to make them work from your Apple device. Read more about HomeKit from here.

The DoorLock vulnerability is actually associated with Apple HomeKit. The vulnerability exists in setting up the name of the smart device in HomeKit. When the name of the device is set to a large string of more than 500,000 characters due to no limit being set on the name of HomeKit devices, when the device try loading, this will be disrupted. In most of cases, the vulnerable device will crash, become unresponsive, and may enter into the reboot loop. Once the vulnerability is triggered on the device and the device becomes unresponsive, reboot doesn’t get the device back to your control. Restore will also not solve the problem as long as you sign in to the same iCloud account linked to the HomeKit device. Because this data is stored in iCloud, restoring a device the bug was triggered on and then signing back into the associated iCloud account will trigger the bug again.

According To Trevor Spiniolas, The Security Researcher Who Publicly Disclosed The Vulnerability.

Note: if you want to try exploiting the DoorLock vulnerability, you can download the vulnerable application from this Git. But, bear in mind, running this application results in the loss of functionality of your iOS device. Run this at your own risk.

How To Prevent Apple Devices From DoorLock Vulnerability?

How To Disable The HomeKit Devices In The Control Center In iOS?