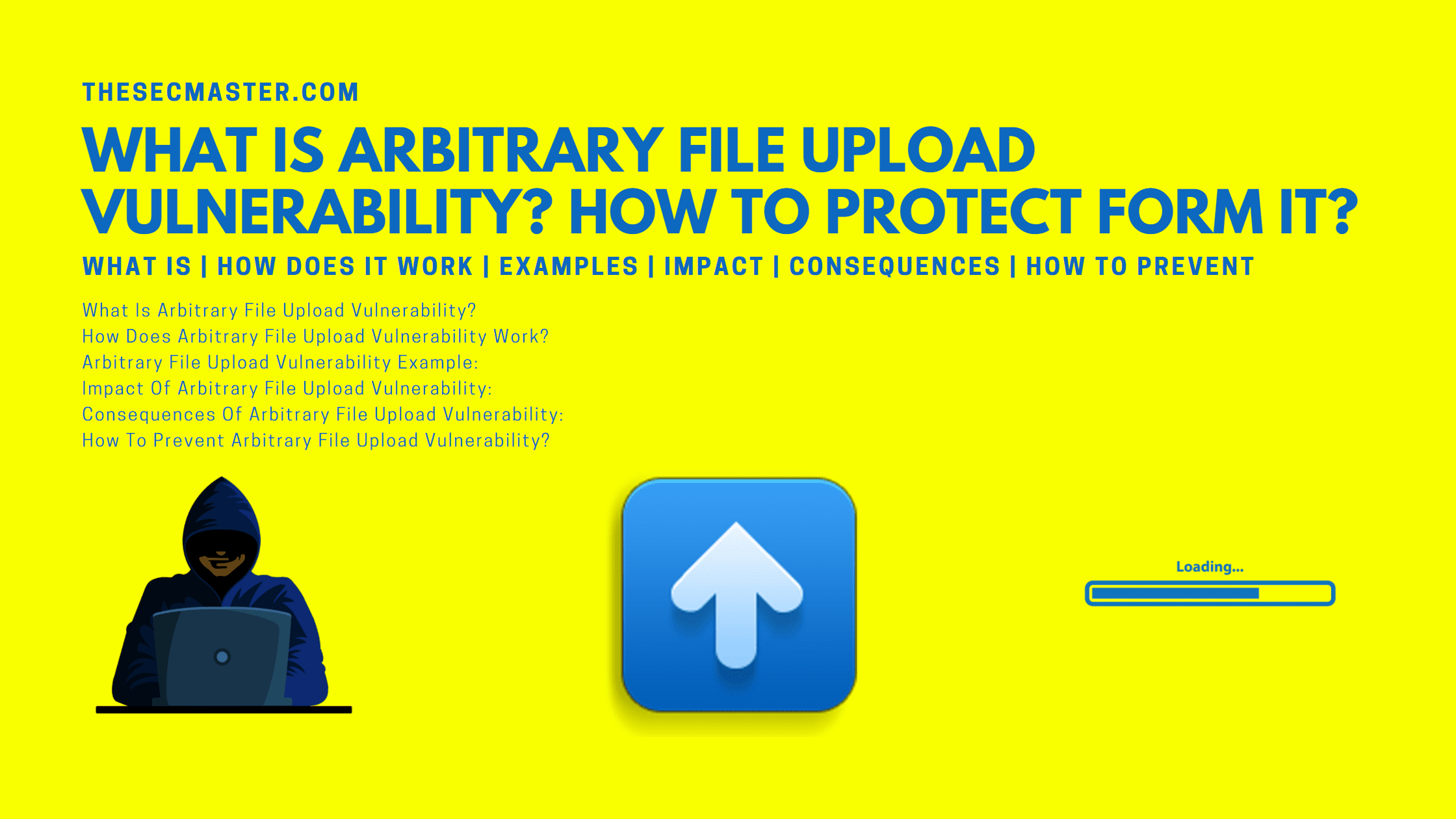 What Is Arbitrary File Upload Vulnerability? How To Protect Form It?

Uploaded files represent a potential risk to applications. Most attacks are initiated by adding malicious code to the system. Then the attack finds a way to execute that malicious code. Using an arbitrary file upload helps criminals accomplish this step.  The consequences of arbitrary file upload may vary, including an overloaded database or file system, complete system takeover, client-side attacks, forwarding attacks to back-end systems, or simple defacement. Protecting your system from being compromised due to arbitrary file upload vulnerability is essential.

This article will discuss arbitrary file upload vulnerability, how it works, its impacts, and how to prevent it. Let’s get started.

What Is Arbitrary File Upload Vulnerability?

An arbitrary file upload vulnerability is a type of security flaw that allows an attacker to upload malicious files onto a server. This can be done by exploiting a vulnerability in a web application that doesn’t properly validate the file type or by tricking the user into uploading a malicious file. Once uploaded, these files can be used to compromise the server or perform other malicious actions.

Arbitrary file upload vulnerabilities are often used in attacks known as “web shell” attacks. In these attacks, the attacker uploads a malicious PHP script onto the server. This script can then be used to execute arbitrary commands on the server, allowing the attacker to gain full control of it.

Arbitrary file upload vulnerabilities can also be used to attack WordPress websites. In these attacks, the attacker uploads a malicious plugin or theme file onto the server. This file can then be used to compromise the website or perform other malicious actions.

There are two types of file upload vulnerability. These include

The attacker first identifies the presence of file upload vulnerability on the website using tools such as WPScan. It tells them what vulnerability is present and which component of a website. Once they detect and confirm the vulnerability, they exploit it by uploading a file directly or a remote file using a given URL.

Once the file has been successfully downloaded on an accessible area of the webserver, the attackers utilize tools like Metasploit to get a remote shell on the platform. Using this shell, they can use the platform vulnerabilities to get root access or run the file uploaded and compromise the server security.

Arbitrary file upload vulnerability found in a famous image resizing library called TimThumb. This library is used across several WordPress plugins. The vulnerability allowed third-party to upload executable PHP code, which may be hosted on their website, in place of images.

The uploaded PHP code file would be stored in publicly accessible storage, and then the code could be executed to put the web server at risk. The file named ‘Thumb.PHP’ would appear harmless and accepted by the application.

This vulnerability has a high impact, and malicious code can be executed on the client-side or in the server context. The likelihood of vulnerability detection for the intruder is high, and the prevalence is common.

The consequences of an arbitrary file upload vulnerability can be devastating, depending on how the flaw is exploited. Malicious users could gain full control over the server, leading to data loss or theft, cross-site scripting (XSS) attacks, SQL injection attacks, denial of service attacks, or even identity theft. In some cases, these flaws can also be used to launch attacks against other systems that are connected to the server.

Here are some preventive measures to protect your website from arbitrary file upload vulnerability.