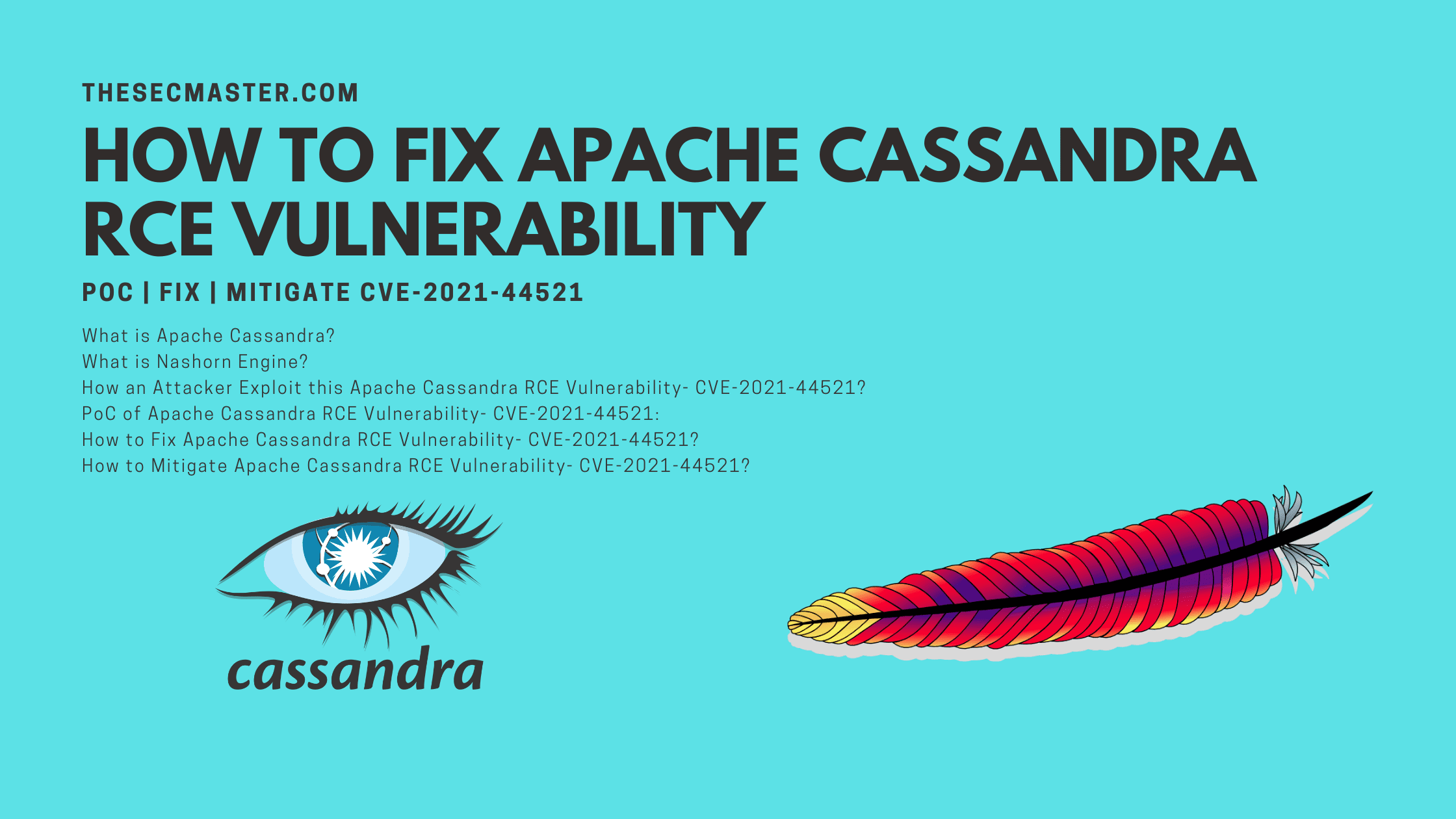 Before we jump into the topic, it is necessary to understand certain aspects to learn about the flaw. Let’s get started.

What Is Apache Cassandra?

Apache Cassandra is a well-known NoSQL database developed in Java. Its Scalability and distributed nature made it extremely popular. Companies like Netflix, Twitter, Urban Airship, Constant Contact, Reddit, Cisco, OpenX, Digg, CloudKick, Ooyala, etc., will use this database extensively in their development projects. Its distributed nature made it more popular in DevOps and cloud-native development landscape. A well-known cloud-based turnkey solution DataStax (a serverless, multi-cloud DBaaS) is built on Cassandra.

What Is Nashorn Engine?

Since Cassandra is a NoSQL database, it stores data in JSON files. It uses User-Defined-Functions (UDFs) (written in Java and JavaScrip) to perform custom processing of data in the database. Nashorn is a JavaScript Engine that runs on top of the JVM, used to interpret UDFs written in JavaScripts.

Cassandra wrapped the Nashorn Engine with is a SandBox making Nashorn execution more secure. Or else anyone can abuse Nashorn by sending malicious untrusted code or UDFs.

How An Attacker Exploit This Apache Cassandra RCE Vulnerability- CVE-2021-44521?

When the flag enable_user_defined_functions_threads in cassandra.yaml file is set to false, attackers canescape the sandbox and achieve remote code execution.

Note: These flags can also be configured via the Config.java configuration file.

This is the key to the exploitation of CVE-2021-44521. It’s default value is ‘true’.true == Each invoked UDF function will run in a different thread, with a security manager without any permissions. This will lead to a DoS attack.false == All invoked UDF functions run in the Cassandra daemon thread, which has a security manager with some permissions. This will lead to SandBox escape and RCE.

JFrog Security team says that “enable_user_defined_functions_threads is set to true by default, which means each invoked UDF function will run in a different thread, with a security manager without any permissions. This enables a malicious user to create a UDF that will shut down the Cassandra daemon. This is due to the behavior of the UDF timeout mechanism, governed by the user_defined_function_fail_timeout flag. If a UDF function runs more than the allotted time, the entire Cassandra daemon will shut down. An attacker can easily DoS the entire database by creating a function which loops forever with while(true).

When enable_user_defined_functions_threads is set to false, the UDF code runs in the daemon thread, which specifically has the permission to invoke setSecurityManager! This immediately allows us to turn off the security manager. This actually allows us to bypass any class filter by creating a new script engine, which is not restricted by the class filtering mechanism.”

Kaspi published a PoC in the blog post. The researcher showed how a file named “hacked” is created on the Cassandra server.

The flag allow_extra_insecure_udfs is set false by default, which prevent turning off the security manager and blocks UDFs to interact with elements outside the sandbox.

We recommend users of Apache Cassandra to upgrade to one of the following versions.

How to upgrade Apache Cassandra on Linux?

There are a few simple prerequisites before upgrading Apache Cassandra database:
1. Take the system snapshot backup.
2. Remove all dead nodes.
3. Do not run nodetool repair or other tasks.

The vendor has recommended a few mitigations techniques for those who can’t apply the permanent patch soon.