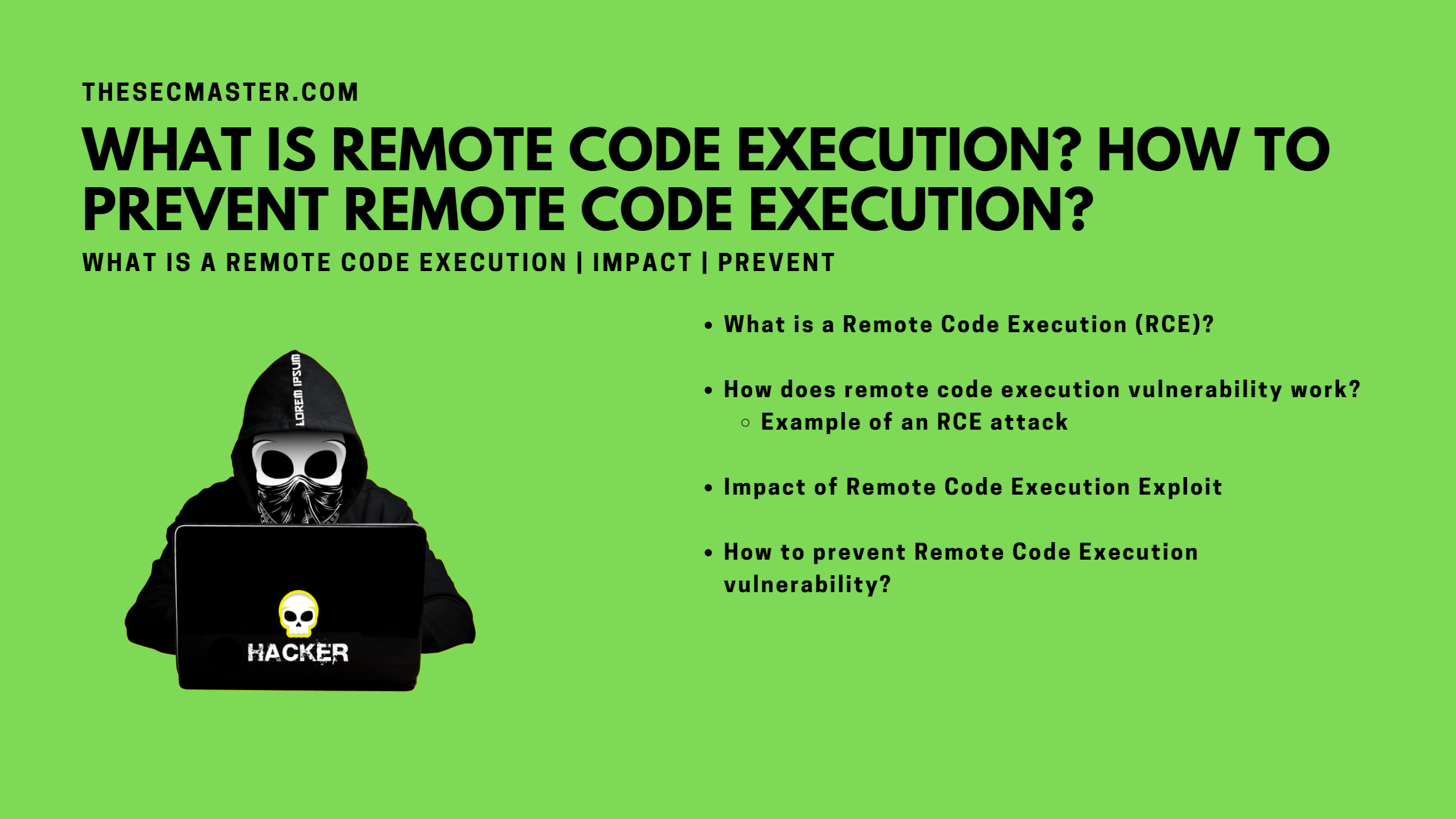 Cybercriminals use a wide range of techniques to target vulnerable systems, and remote code execution is one of them. According to a 2020 Global Threat Intelligence Report by NTT, remote code execution is the most used attack strategy, followed by injection attacks. The major benefit of this technique to hackers is that they can attack your system from anywhere, regardless of the location.

What Is A Remote Code Execution (RCE)?

A remote code execution or RCE is one of the most critical attacks that can be executed on an application or a server. It refers to the ability of an attacker to access and modify a system without authority and regardless of the location. RCE enables an attacker to take over a server or a system by running arbitrary malicious software.

RCE is a vulnerability that can be exploited by creating malicious code and injecting it into the server using an input. The server executes the command unknowingly, and it allows criminals to gain access to the system. The attacker might try to escalate privileges after gaining access. It can lead to a full compromise of the vulnerable web server or application.

In a remote code execution attack, an intruder intentionally exploits an RCE vulnerability to execute malware. It can be done using a form, query components, cookies, or uploading files to an application. While developing an application or a website, many developers overlook the need for input data validation and leave their applications vulnerable.

This kind of vulnerability is widely used to execute malicious code remotely. Here are the general steps an attacker uses to exploit an RCE vulnerability.

The malicious code execution is generally achieved using terminal commands and bash scripts. The attacker injects the code into a vulnerable application that executes it or calls the kernel to execute it.

Example Of An RCE Attack

Remote code execution attacks are so pervasive, commonplace, and widespread that it’s difficult to choose amongst the countless examples. Let’s see one of the biggest and devastating examples of an RCE attack.

On May 12, 2017, it was revealed that hundreds of thousands of systems worldwide were infected by WannaCry. It’s a malware that encrypts computer files, locks out the users, and demands a ransom payment to unlock or decrypt files. WannaCry malware allows remote code execution if a hacker sends a specially crafted message to Microsoft Server Message Block (SMB). It’s a protocol used to share access to files, printers, and other resources on a network.

The hacker scans the Internet to find vulnerable ports and uses one of the alleged U.S National Security Agency tools called “EternalBlue”. Once the SMB vulnerability is confirmed, the hacker uses another NSA tool called DoublePulsar to install WannaCry ransomware on the compromised system.

Remote code execution can leave a system, application, and user at high risk, resulting in an impact on the integrity and confidentiality of the data. A hacker who can execute commands with server or system privileges can

To survive in this ever-evolving threat landscape, it’s necessary to have robust security measures in place. You can prevent remote code execution vulnerability by using the following techniques.