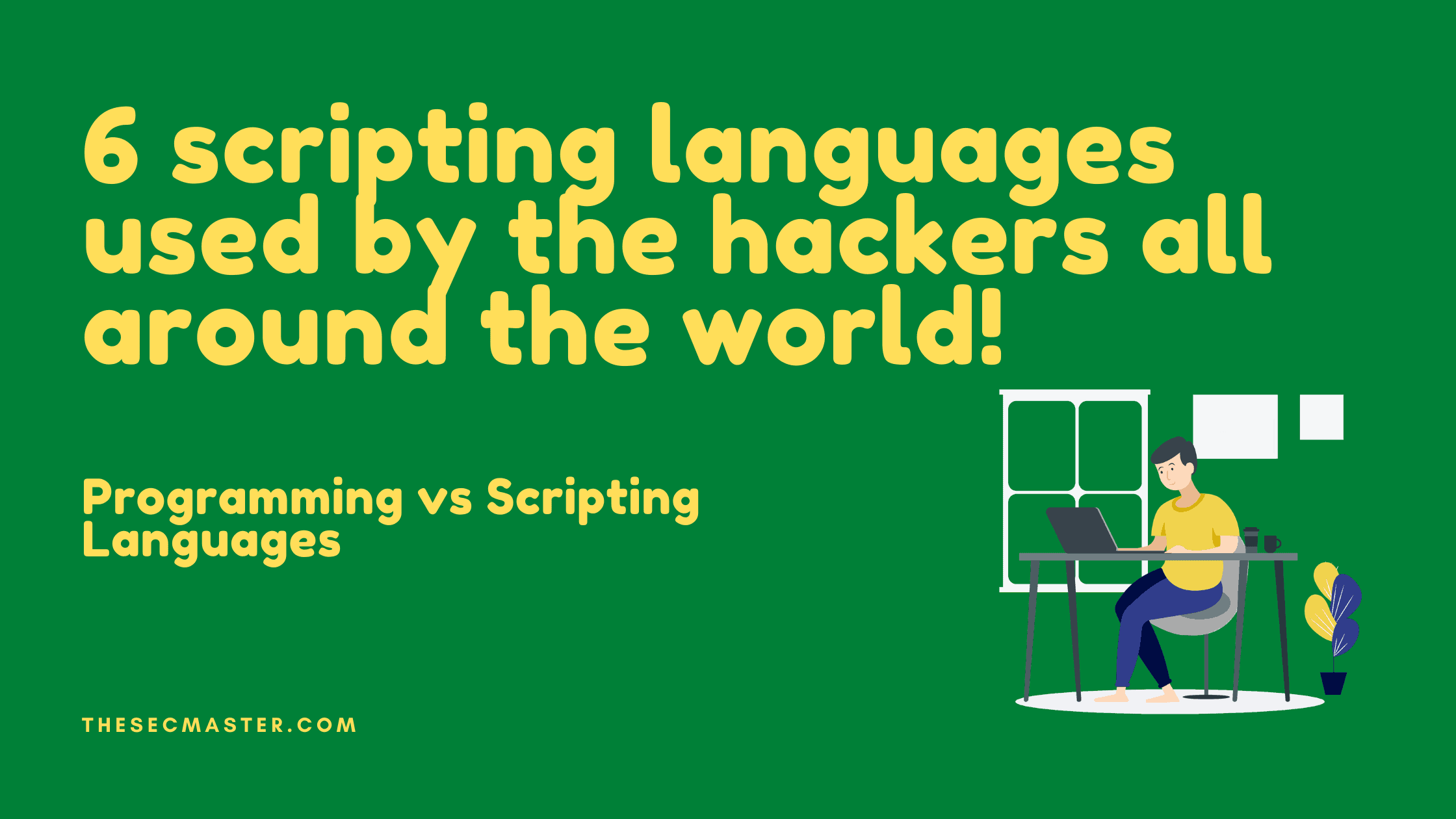 There is no single language developed for hackers and pentesters, and no buddy can develop in the feature too. There is a reason for that. Hackers and Pentesters can’t limit themselves to a particular technology; It is their job to work with pretty much anything people use. They need to understand and learn the database, operating systems, programming languages, applications, services, and tools. It is not practical to cover all the topics in a single article. As the title says, we will be covering only a few commonly used scripting languages for hackers and pentesters in the article.

A scripting language is a variant type of programming language which doesn’t need compilers to execute. Those who are not from a programming background may not understand the statement. Let us break it for non-programmers.

To understand what a scripting language makes different from a programming language. Programming language needs a special type of utility called a compiler to run a program. Before a program runs, the compiler does pre-execution checks and converts the program to machine code. Then machine code will be sent to the runtime environment for execution. On the other hand, scripting languages just interpret the written code line by line and directly send the code to the runtime environment tor execution without compiling it.

Why Are Scripting Languages Suitable for Hackers and Pentesters Than Programming Languages?

Bash is the most popular and powerful scripting language in Unix and Linux systems. It’s been widely used by administrators to manage everyday tasks. Basically, Bash is a set of Linux commands used to perform pretty much anything like automating repetitive tasks, scheduling admin jobs, running health checks on the Linux servers, updating patcher on multiple servers at once, etc. In addition to these, it can also be used with other utilities to build productive scripts, which can help administrators carry out difficult tasks. All these powerful features of Bash script didn’t leave hackers and pentesters gaining attention to Bash scripting. Hackers and Pentesters found this as a great tool to perform hacking or pentesting the system. Because Bash can be used with other networks, hacking tools, and programming languages to deliver the payload to the target, it helps exfilleting the data from the victim and create a remote executable application.

VB script is the best scripting language for the Windows platform. It is used to develop many useful Windows applications. On the other side, it has been used to develop malware programs as well. In the early days, most of the malware programs targeting the Windows operating system were built using VB scripts. One such virus is ‘Iloveyou virus‘, which created a sensation by infecting more than 10 million Windows computers on the globe in 2000. Still, VB scripts are being used in hacking and pentesting.

PowerShell is like a Windows Bash shell. Windows administrators use PowerShell in their daily like to manage the server echo system clean and healthy. Admins use Powershell scripts to automate daily tasks like health check monitoring, scheduling a daily task, and applying Windows patches on the servers. Despite all that, the features offered by PowerShell attracted hackers and pentesters too. Hackers and pentesters use PloweShell to run malicious commands, download and run malware programs, evade Windows defender systems in privilege escalations, and create a malicious payload to exploit Windows computers.

There is some programming language that can be used as both interpreted and compiled languages, like Python and RUBY. Well, RUBY has been seen more used as an interpreted language. However, there are some compilers also available to use RUBY as a compiler language. RUBY is a dynamic, open source, and general-purpose programming language. It’s the hacker’s and pentester’s all-time favorite language as it provides various functions to create exploits. Word’s popular pentesting framework Metasploit is developed on the RUBY platform. Not just the framework, all the exploits used in the Metasploit framework has been written in RUBY language. So those who are in the hacking and pentesting area they can’t leave RUBY as an optional. This is the must-know scripting language for hackers and pentesters

These are our hand-picked six scripting languages that are being used in hacking and pentesting. The list doesn’t end here. Please leave in the comments if you want to know more on this topic.