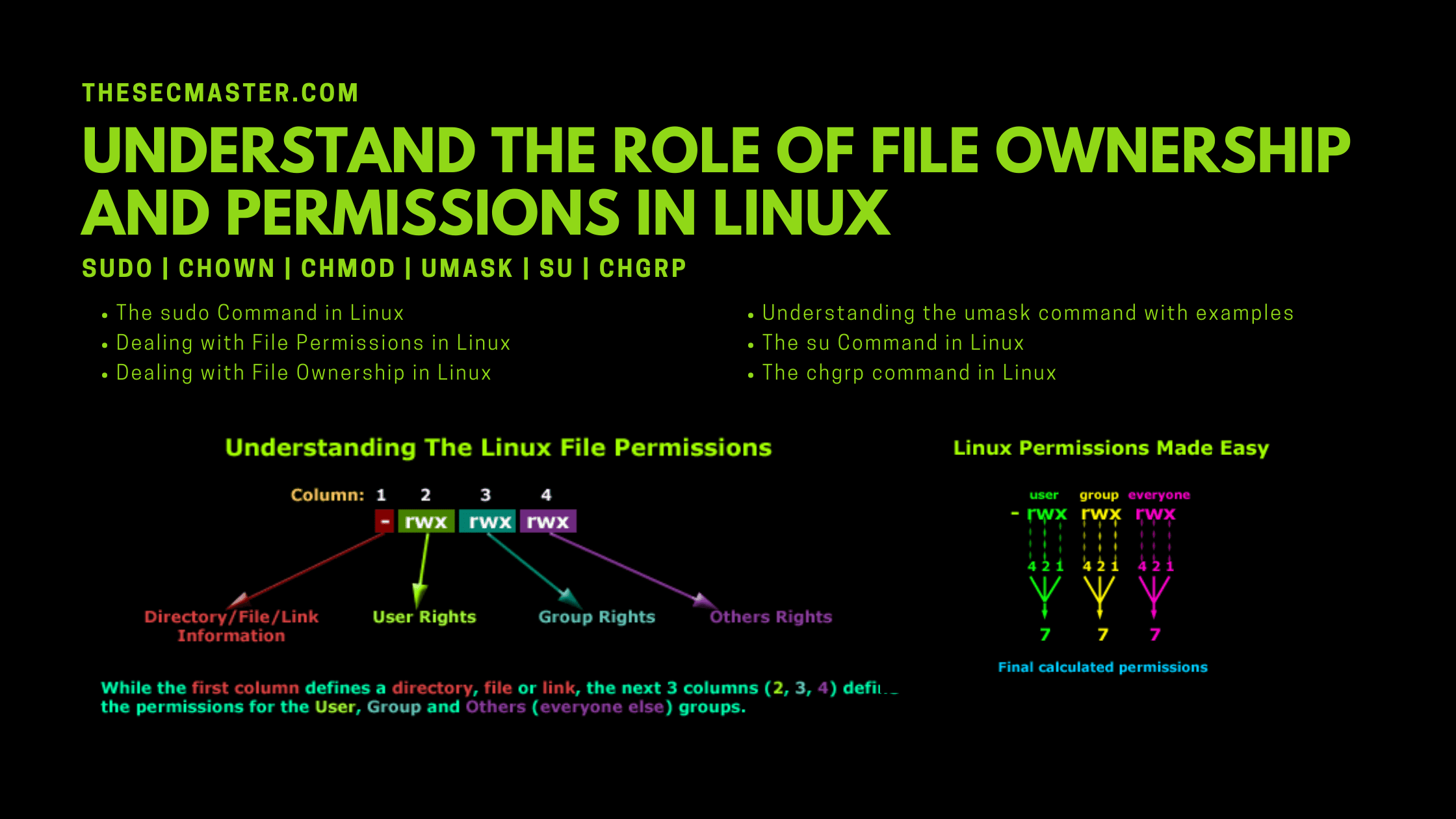 Understand The Role Of File Ownership And Permissions In Linux

For many Linux users, file ownership and permissions can be difficult to get used to. It is usually hypothesized that a command line is required to accomplish what you desire from the file system. The good news is there are other methods for dealing with the file system which offers greater strength and flexibility, that many people are unaware of. The easiest desktop interface eliminates the need for command-line usage even if you have to deal with the file ownership and permissions. Files and folders can actually be managed from the file manager. However, it is always better to understand what you are doing before accessing the graphic user interface.

The sudo Command In Linux

The sudo command is the short form of ‘superuser do’. It grants the required permissions for executing a command similar to another user, for instance, the superuser. Sudo gives authorized users the provision to execute commands as another user, – specified in the / etc/sudoers file. The effective and real GID and UID of the issuing user are matched with those of the target user as laid down in the password file. By default, sudo requires users to authenticate themselves using a password. This authentication involves the user-specific password and not the root password itself.

After user authentication, a timestamp is logged, and the user can use sudo for a short period without a password. This timestamp can be updated if the user issues sudo command using the -v tag. If an unauthorized user tries to execute a command via sudo, the attempt to breach system security will be considered unsuccessful, and an email will be sent to the appropriate authority. The default permission given for failing to execute this command lies with the root. Note that if an unauthorized user tries to run sudo using the -l or -v tags, no mail will be sent. This is so because these commands enable users to determine if they are allowed to use the sudo command.

Sudo can record successful and failed attempts (in addition to errors) in the system log (Syslog), a unique log file, or both. By default, sudo makes the entry into the Syslog, but this can be changed during configuration time or in the sudoers file. If the execution of the program is successful, the return value from sudo will be the return value of the program executed.

Otherwise, sudo exits a port value of 1 if there is a configuration/authorization problem or if it cannot execute the specified command. In the latter case, the error string is exported to ‘stderr’. If sudo cannot enter one or more entries in the user’s PATH, an error is printed to stderr. This usually does not occur under normal circumstances. The most common reason for returning the “permission denied” is when you make an automatic transition and one of your PATH directories is on a device that is currently unreachable.

Sudo strives to be safe when commands are executed. Variables that determine the mannerism of dynamic loading and binding can be utilized for subverting a program that is being run by sudo. As a resolution, it may remove Some environmental variables specific to the system, particularly from the environment that issues the commands which are to be executed. Examples:

Dealing With File Permissions In Linux

There are two simple commands to manipulate the file ownership and permissions in the Linux file system as depicted below:For changing ownerships, you can use the command: chown Likewise, to change the permission of a file, you can use the command: chmod It is not difficult to use either of these two commands. However, note that only the root user or the current owner can change permissions or file ownership. For example, a new folder has been created with the name /DAT/SHA in the data partition. Users arunkl and David need to read and write access to this folder. There are several ways to do this. If Bethany and Jacob are the only users of the system (and the network is known to be very safe)., you can change the folder permissions to allow access. One way to do this is to issue the command:

This command is explained in detail as follows-

As you can see, this command opens the SHARE folder and makes it accessible to anyone in the system. It must be remembered that this is purely for demonstration. As far as, the permission part is concerned, it is explained below.

You need to use ‘o’ prudently since it gives everyone read and writes access. The permitted permissions that you can give to a file are explained below:

The use of the -R key is important. If there are many subfolders and files in the SHA directory and you wish to apply for the permissions from the parent folder to all the dependent subfolders then you need to use the-R(recursion) key.

Dealing With File Ownership In Linux

Changing the ownership of a file or folder is easy. Let’s say David transited a folder for arunkl in the SHARE library – but David still has ownership. This can be changed with simple commands like:

Understanding The Umask Command With Examples

In GNU / Linux systems, each file or folder has permissions. There are three types of permissions (those allowed for each file type, including directories).

Permissions are defined for three types of users.

umask (User Mask) is a POSIX environment command and function that defines the file creation mask for the current process, which determines the permissions of files and directories created by the process. The process may change the file status creation mask using umask, and the subsystem will obtain the new value. You can use umask to set new file permissions that the process creates.

The user mask contains octal permission values that are assigned to all new files. To calculate the umask value, the authorization value from which you have to subtract is 666 for files and 777 for directories. The value you get then has to be used with the umask command.

For instance, there is a need for changing the default file mode to 664 (rw-wr-). On subtracting between 666 and 664, you get 002. This is the value that will be used as an argument to the umask command, as shown below:

You can also check the permissions through unmask command. For example, when we create a file in the temp directory

Here the user who has created the file can read and write, the group to which the user belongs can only read, and accordingly, all others can read-only. The octal value for this umask is 0x022. To check this value using umask command.

You will get the output 0022
Moreover, you may have file processes and daemons, and you may want to manage the permissions on those files. In this case the question is who shares the same Apache group? In general, you should place the umask command in the script used to run the daemon or in the first included file. So for Apache this is environment includes /etc/apache2/envvars. You can now execute the command-

And restart your apache.

The su Command In Linux

The su command can also be used to switch over to the root account. Here, you have to enter the su command without any parameters or arguments:

You will be prompted to enter the password for the root user. The arguments, which are commonly used while invoking the su command are -, -S, and -login. For instance, if you desire to run a login shell similar to the real login and simultaneously change the current directory, enter this command

You can use the”–” argument to separate su option from other arguuments that are present in the shell. If necessary, the user is asked to enter a password. An invalid password generates an error message. All valid and invalid attempts are recorded for detecting system abuse. Likewise, if you desire to run another shell, you can use the -s option. For example, if you want to switch to the root and run the shell called zsh then you need to type:

On the other hand, if you are desirous of preserving the whole environment of the calling user, then you can use the -p option.

Additional arguments can be provided after the username. In this case, it will be provided in the user login shell. In particular, if you specify the argument, most command interpreters refer to the following argument as order. The command is executed by the shell specified in the target user’s

The chgrp Command In Linux

The Linux chgrp command is used to change the group ownership of a file or directory. First, you must have admin rights to add or remove groups. You can connect as root or use sudo to connect. To add a new group, you can use:

Example 1: Change the group ownership of a file.

Example 2: To change the group ownership of a folder.

Example 3: Recursively change a group’s ownership of a folder and all other subfolders and files, files within a subfolder

Example 4: Using the group name of a reference file to change the group of another folder or file:

Example 5: Describing the action of a file whose group has been changed

Example 7: Describing the non-action and action of every file