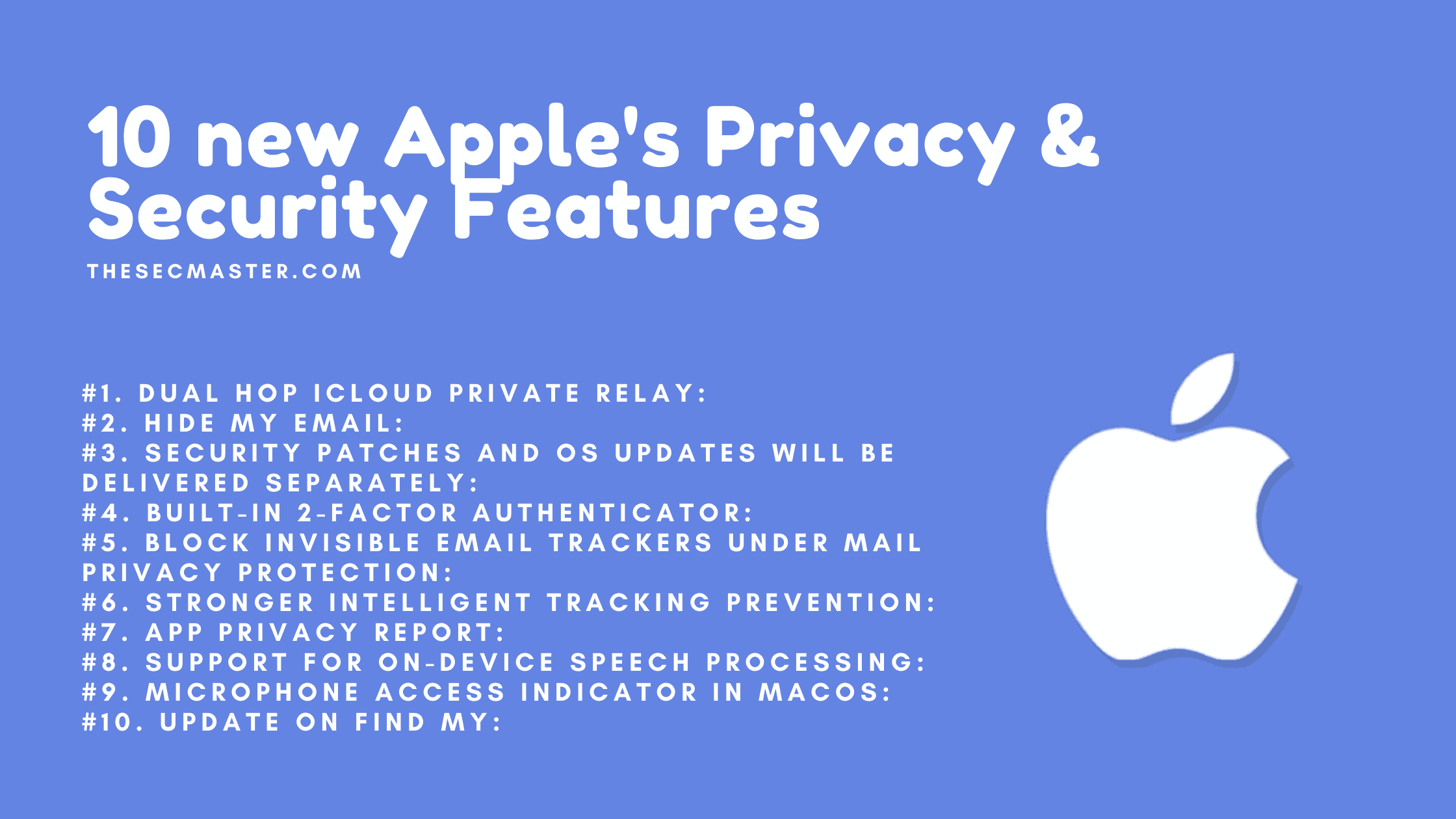 On 7th June 2021, Apple has announced an array of Apple’s privacy and security features to its upcoming versions of iOS 15, iPadOS 15, macOS Monterey, and watchOS 8at its WWDC 2021 event. Worldwide Developers Conference (WWDC) is an information technology conference held annually by Apple Inc. to unveil new software and technologies in the macOS, iOS, iPadOS, watchOS, and tvOS families as well as other Apple software.

Let’s see what is there in the list of Apple’s privacy and security features that Apple unveils in the event.

With no additional cost for existing iCloud subscribers, Apple is offering dual-hop iCloud private relay. Dual-hop iCloud private relay is nothing but a two-node VPN service. User’s internet traffic in the Safari browser will be routed through this VPN tunnel. This feature offers more privacy by masking the user’s real IP address under the VPN layer. It’s going to be difficult for adversaries to track the IP address, location, and browsing activity of the user.

Apple says, “All the user’s requests are then sent through two separate internet relays. The first assigns the user an anonymous IP address that maps to their region but not their actual location. The second decrypts the web address they want to visit and forwards them to their destination. This separation of information protects the user’s privacy because no single entity can identify both who a user is and which sites they visit.”

Apple also clarifies that this feature will not work in these countries due to regulatory reasons. China, Belarus, Colombia, Egypt, Kazakhstan, Saudi Arabia, South Africa, Turkmenistan, Uganda, and the Philippines

This feature is bundled with iCloud+ service. This feature enables the ability to generate a unique random email address when signing up for a service on the web without having to give away the actual email address.

#3. Security Patches and OS Updates Will Be Delivered Separately:

Apple has decided to block invisible tracking pixels embedded inside the email messages. A single-pixel image is being used by many email services to know the recipient has opened the email. The single-pixel image tends to send other sensitive data like users’ IP address, device location, and the email client used when sending the response to the sender. Some web browsers have already blocked this invisible email pixel. Now, Apple said it’s bringing privacy features to the Mail app.

Intelligent tracking prevention, which is one of Apple’s privacy and security features, now it’s getting stronger in the upcoming update. Apple is going to hide the user’s IP address from trackers. This will cut down the tracker’s ability to utilize the user’s IP address as a unique identifier to monitor and track the user’s web activity.

This feature allows users to check how often apps have accessed sensitive data such as location, photos, camera, microphone, and contacts during the last seven days. Additionally, this feature also displays domains connected by the apps and how recently the communication occurs. App Privacy Report is shipped as part of new Apple’s privacy & security Features to its upcoming versions of iOS 15, iPadOS 15, and watchOS 8 later this year.

This microphone access indicator helps the user recognize which apps have access to Mac’s microphone in the Control Center. Starting with macOS Monterey, users will be notified with a new orange-color recording indicator whenever an app has access to the microphone, similar to the feature introduced in iOS 14.

Apple said Find My, its Bluetooth location tracking system, is going to ship with a newly added feature. From the new update, device owners can track their device location even when the devices have been powered off or erased.

Looking at all these new Apple’s privacy & security Features, we can say that Apple is using these features as a crucial weapon to differentiate itself from its rivals. However, these features look more like user beneficiaries than just business tactics. These updates definitely will give a big push to Apple and lead the sector.