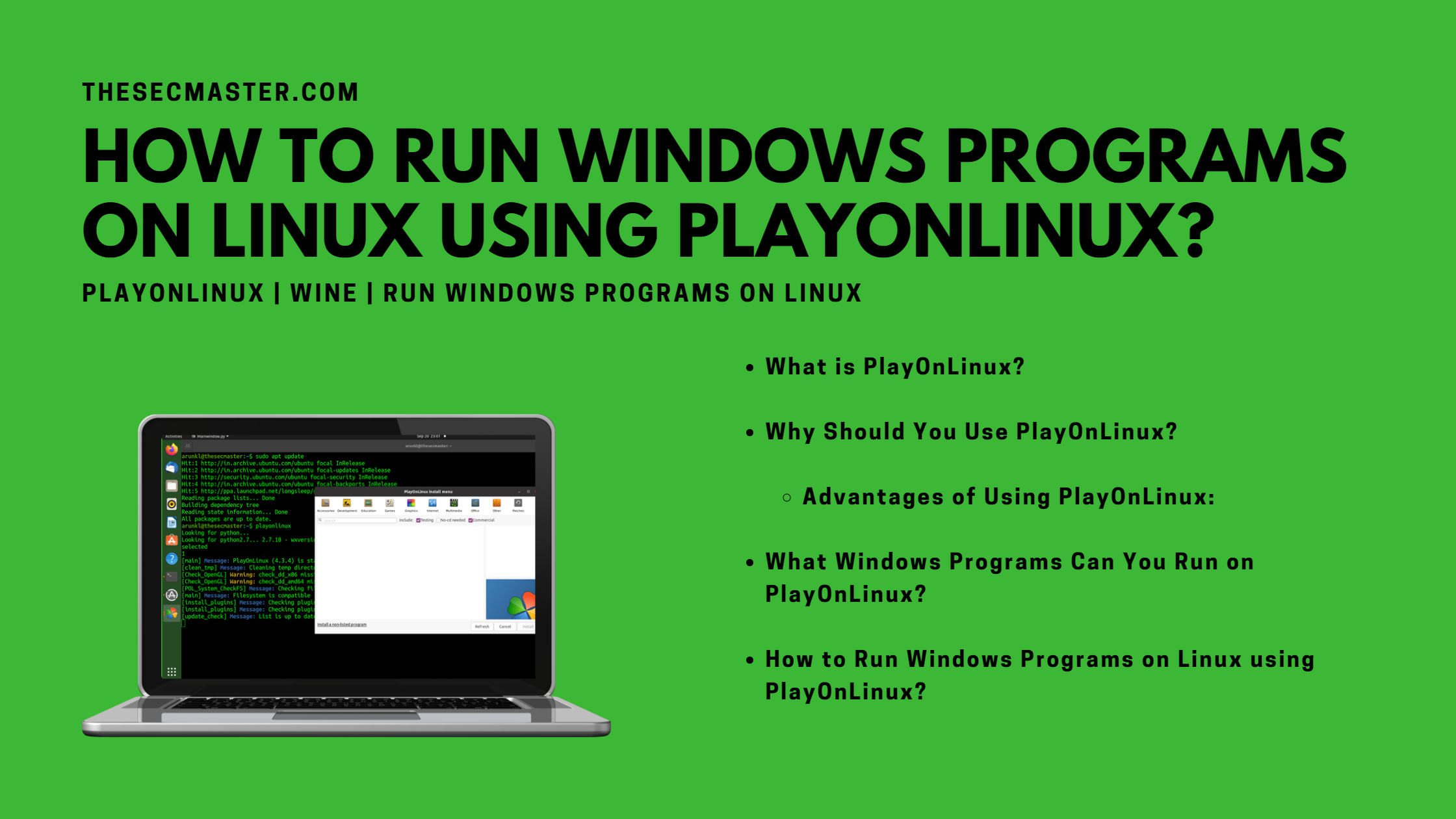 How To Run Windows Programs On Linux Using PlayOnLinux?

In today’s world, technology is developing in such a way that you can run anything irrespective of platforms. We are moving away from compatibility to increase usability. Now this is the era of cross-platform. You can run Windows programs on Linux, Linux programs on Windows, and the same applies to mac either. Now all these cross-platform technologies like hardware & software virtualization, container technologies, emulators, and cloud, have given the freedom to choose any programs without compatibility hassles. However, let’s see all of those techs in other posts. Let’s limit the option to how to run Windows programs on Linux using PlayOnLinux in this section.

If you are a Windows user who wants to switch to Linux or a Linux user missing some Windows programs and games which run only on Windows. This post is for you. In this unique post, we will show you how to run Windows programs on Linux using PlayOnLinux.

“PlayOnLinux is a piece of software which allows you to easily install and use numerous games and apps designed to run with Microsoft® Windows®. PlayOnLinux brings a cost-free, accessible and efficient solution to this problem.”

WINE is a Windows environment created on Linux. PlayOnLinux is an independent WINE created for each app or game installed. If WINE is a bottle, then PlayOnLinux is a container with multiple WINE bottles.

Why Should You Use PlayOnLinux?

If you ever tried to run Windows programs on Linux using WINE, then we are sure you will not take much time to understand the PlayOnLinux because the app runs on WINE. Yes, PlayOnLinux is a graphical interface of WINE. But, it is not sufficient to tell that it is just the front face of WINE. It has more advantages over WINE. Let’s see the benefits of using PlayOnLinux.

However, there are a couple of challenges in using the app.

What Windows Programs Can You Run On PlayOnLinux?

This is the first question that comes to memory when you learn a there is a new way of running Windows programs on Linux. For your information, this app will run pretty much everything that WINE runs on it. On top of that, its preloaded configurations give some sort of freedom from setting up the configurations, especially for gamers.

You can see the list of supported apps and games from here: PlayOnLinux Supported Apps & Games.

How To Run Windows Programs On Linux using PlayOnLinux?

Before you run Windows programs on PlayOnLinux, you should install it on your Linux machine. The installation procedure is straight and simple like other lightweight applications. You can install the app on pretty much any Linux system. We are going to show the installation on Ubuntu Linux.

How to Run Windows Programs on Linux using PlayOnLinux?

This is how you can run Windows programs on Linux using PlayOnLinux.